Previous product Product 10 of 53 Next product 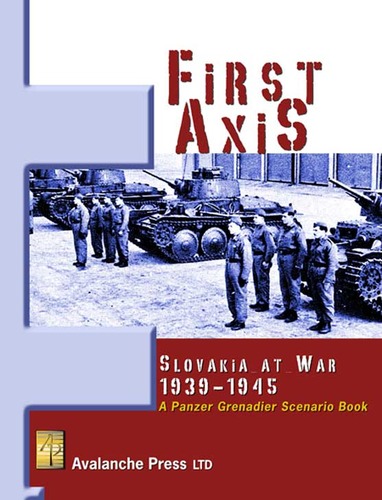 In March 1939, the small nation of Slovakia declared its independence from Czechoslovakia and immediately became a satellite of Nazi Germany. Slovak troops became the first Axis forces to fight alongside the Germans, joining in the invasion of Poland in September 1939. They also marched into the Soviet Union in 1941. After five years as the most minor of allies, the Slovaks turned against the fascists and fought with the victorious Allies in the last year of the war.

First Axis is a 64-page book supplement to the Panzer Grenadier series, focused on the battles of the Slovak Army against the Hungarians, Poles, Soviets and Germans. There are 30 new scenarios plus background articles on the armies and weapons involved and unit organization diagrams. This module is not playable by itself, but requires ownership of Panzer Grenadier: Eastern Front, Panzer Grenadier: Road to Berlin and Panzer Grenadier: White Eagles to enjoy all of the scenarios.