Previous product Product 38 of 68 Next product 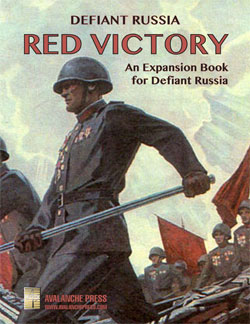 In June 1944, the Red Army opened a massive offensive known as Operation Bagration. Designed to expel the Hitlerite hordes who had invaded Mother Russia three years earlier, the attack began a series of victorious offensives that only ended with the capture of Berlin less than a year later.

Red Victory uses the map from our Defiant Russia Players’ Edition game and the pieces from our old out-of-print Red Vengeance game plus 40 new ones to re-create this campaign on your game table. The game system is the same as that of Defiant Russia, with a few minor alterations to reflect the changed situation.

The game plays swiftly, much like its parent game. The Red Army’s goals are simple: drive forward until Berlin falls. The Axis just play a more complicated game, holding back the Soviets, counter-attacking judiciously, and trying to keep Germany’s allies from defecting to the other side.

Red Victory includes full-color player aids like those for the Defiant Russia Players’ Edition, including scenario set-ups. The 180 pieces represent for the most part armies for the Soviets and corps for the Germans. There are also Yugoslav partisans, Romanians, Bulgarians, and Hungarians present. There’s also a 32-page book containing the rules and the usual background you’ve come to expect from an Avalanche Press product.

Red Victory is not a complete game: ownership of Defiant Russia is necessary for its play.