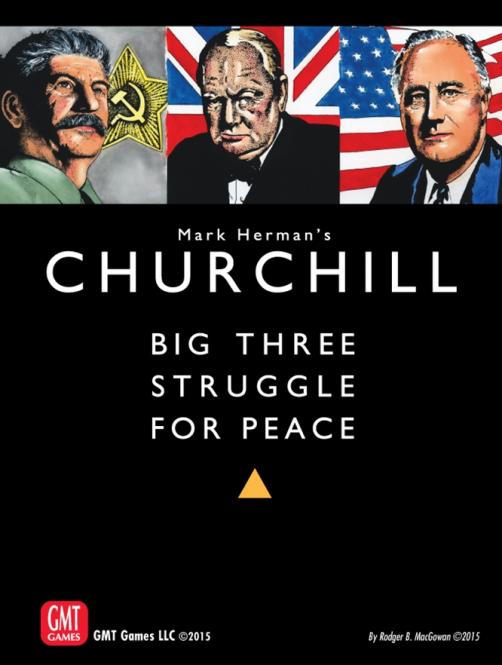 By late 1942 the Axis had been stopped at Stalingrad, El Alamein, and Guadalcanal. With Axis expansion halted and Allied victory only a matter of time and resources Churchill, Roosevelt, and Stalin began to focus on how to shape the ensuing peace to their advantage. Churchill is a game about the inter-Allied conflicts that occurred over the Conference table as each side vies to control the Allied agenda and the course of things to come.

The players in the game take on the roles of Churchill, Roosevelt, or Stalin as they maneuver against each over the course of six Conferences that determine who will lead the Allied forces, where those forces will be deployed, and how the Axis will be defeated. The player whose forces collectively have greater control over the surrendered Axis powers will win the peace and the game.

Churchill is a three player game of Coop-etition where the players must cooperate to win World War II, while at the same time achieving a superior post war position over your allies. If the players collectively fail to defeat the Axis the Allies lose, but if the Axis are defeated, there is a victor of the peace that follows. There is also a two player and solo variant.

Churchill’s game system blends bluffing, winning card tricks, and maneuvering wooden blocks to win World War II. Players compete across six historical Conferences where players vie for determining who will lead the European and Pacific Theaters, where Allied production will deploy into the war, and during Campaign resolution how those forces will engage the Axis armies and navies in battle.

There are 17 historical Conference cards of which only six are used in any game creating high replayability. A player for each conference creates, no random draw, a hand of 10 cards from a finite deck of cards. Each historical conference card creates advantages and disadvantages for each player as they play through four ‘tricks’ ala Bridge to determine who makes leadership changes, deploys Allied production, and manipulates the Axis forces. Based on the leadership ‘trick’ outcome the two theater commanders subsequently execute their campaign vision where they maneuver in-theater Allied forces that advance on German, Italy, and Japan. After all three Axis countries surrender or at the conclusion of the sixth Conference, victory is determined.

Churchill is a game of out thinking your opponent to capture the right Conference agenda at the right time. Do you need to control the European or Pacific Theater command? Do you need to ensure that Allied production favors your strategy for victory? Is it time to implement your deception plans that drive Axis force movements to your advantage and your allies disadvantage? You cannot control every agenda item at any single conference, but the player who wins control of the key agenda item at the right time will shape the character of the Allied victory to their personal advantage and ultimate victory.