Previous product Product 178 of 365 Next product 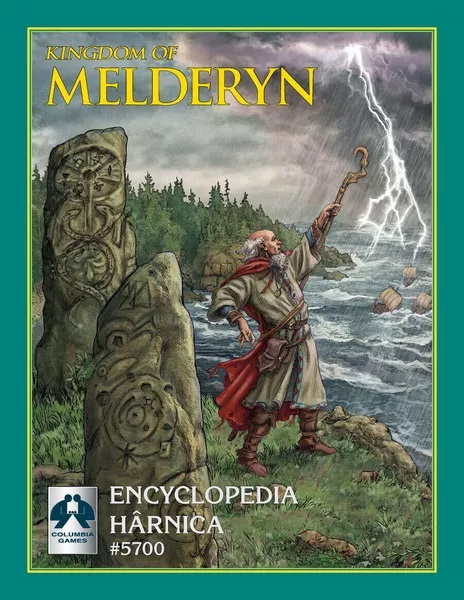 Melderyn, Hârn's oldest kingdom, is named for the island off the southeast coast of Hârn on which it was founded. The many strange goings-on and mystical persons attributed to the island, which is commonly called "The Wizards' Isle", have given the realm a reputation as a place of mystery and enchantment.Melderyn is an exciting kingdom for your Hârn campaign. The kingdom is the gateway for trade and travel between Hârn and the realms of the Lythian continent. Three barbarian tribal nations inhabit lands claimed by Melderyn: the reclusive Bujoc, horse-breeding Hodiri, and primitive Solori. Nomadic gargun (Hârnic orcs) prowl the northern reaches of the realm.Melderyn's King Chunel Toron is advised by a secret assembly of scholars, wizards, and priests called the Council of Eleven.

Although Melderyn's kings have traditionally used diplomacy to achieve their ends and no Melderyni king has fielded an army on Hârn, its history is not without violence. The kingdom has suffered attacks by foreigners, including two viking raids by Ivinian pirates in the last 15 years. Melderyni knights and adventurers have carved out petty kingdoms and joined causes that stained Hârn with blood, including the crusade currently being waged by the Laranian Order of the Lady of Paladins against the Solori tribes.The Kingdom of Melderyn module is supplemented by other Columbia Games publications, including keeps, castles, and adventure sites. The political, religious, and esoteric factions active in Melderyn provide a variety of opportunities for adventure.