Fields of Fire Vol II: `With The Old Breed`

Previous product Product 56 of 423 Next product 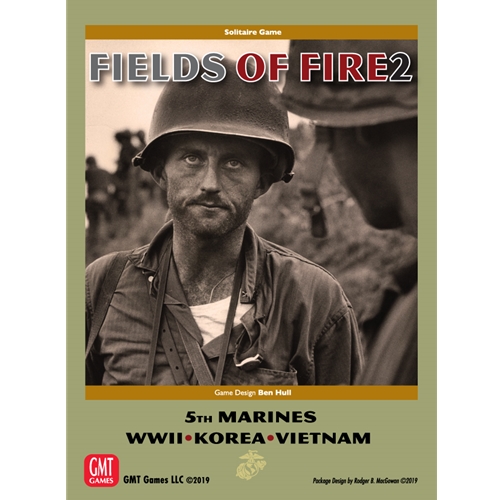 Fleet Marine Force Manual 6-4 Marine Rifle Company/Platoon - "The primary mission of the Marine rifle company and platoon is to locate, close with, and destroy the enemy by fire and maneuver or to repel his assault by fire and close combat."

In Fields of Fire Vol. II: "With the Old Breed," you pin on your captain's bars and take command of a rifle company in the 5th Marines, the most decorated regiment in the US Marine Corps. Test your mettle in three campaigns spanning World War II, Korea and Vietnam. Battle ashore in the blazing heat of Peleliu in September 1944 to discover the Japanese have changed their strategy and you are forced to dig them out of the coral ridges.  Flares reveal waves of Chinese pouring over the rugged mountains of the Chosin Reservoir, Korea, in sub zero weather in November 1950. Fight house to house in Hue City, Vietnam in February 1968. These three campaigns live on in the legends and history of the United States Marine Corps.

Fields of Fire is a solitaire game system that gives players the challenge of commanding a rifle company between World War II and Present Day. The game is different from many tactical games in that it is diceless and card based. There are two decks used to play. The Terrain Deck is based on a specific region and is used to build a map for the various missions your company must perform. The Action deck serves many purposes in controlling combat, command and control, various activity attempts. The units of the company are counters representing headquarters elements, squads, weapons teams, forward observers, individual vehicles or helicopters. A single playing is a mission and several missions from an historical campaign are strung together for the player to manage experience and replacements. A mission can be played in about 1 – 2 hours.


This volume of Fields of Fire  is based on three actual campaigns experienced by units of the 5th Marines of the 1st Marine Division "Blue Diamond" in World War II, Korea, and Vietnam and is the second volume of the Fields of Fire series.

Rules streamlining for use in Volume I and II