Previous product Product 299 of 365 Next product 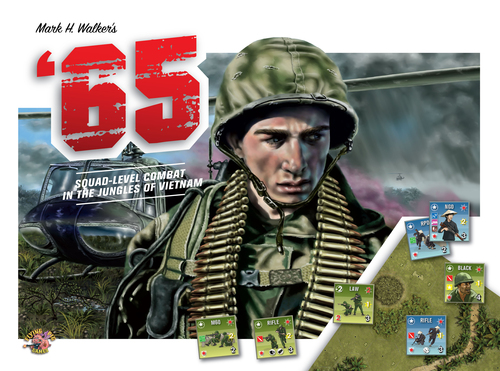 Fast, furious, and fun! Are you looking for something new, something fresh? ’65 might be the game for you. A squad-level, tactical game, ’65 recounts the early battles of the Vietnam War, from Ia Drang to Operation Starlight, and most everything between.

The large and beautiful counters (1" to 1.375" square) represent squads, Leaders, Heroes, Snipers, M-48 and Pt-76 tanks, and more. As these units’ commander you will move and fight over several geomorphic game boards as you try to best your opponent in one of eight, nail-biting historical scenarios.

The game is card-driven, using a system similar to Flying Pig’s Night of Man, adding a sense of delicious uncertainty to the play. “Can I advance my sappers or does the enemy have a fire card he's just waiting to play?"

Furthermore, the cards simplify the game, containing much of the data needed to play. You won’t spend the afternoon with your head in a rule book when you play ’65. This is a game created by gamers for gamers to play. ’65, squad-level gaming at its best.

In stock and shipping.