Previous product Product 141 of 708 Next product 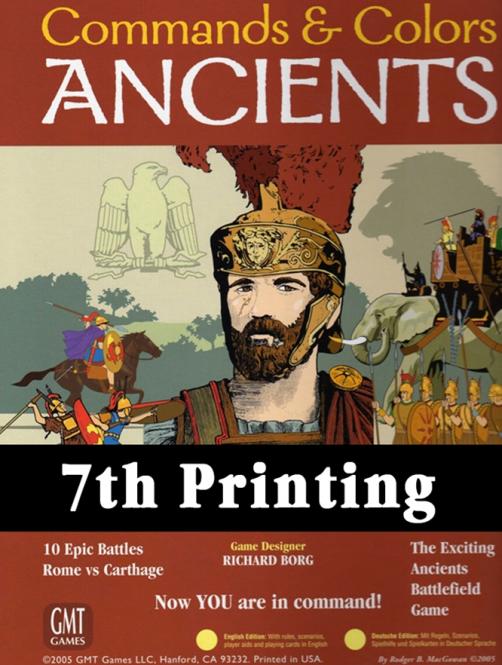 "Commands & Colors: Ancients depicts warfare from the Dawn of Military History (3000 BC) to the opening of the Middle Ages (400 AD). Quite an ambitious undertaking for one game, yet Commands & Colors by design is a unique historical game system which allows players to effectively portray stylized battles from this time in history. The 15 battles, showcased in the scenario booklet, although stylized, focus on important terrain features and the historical deployment of forces in scale with the game system. The battles include Bagradas, Cannae, and Zama."

"The scale of the game fluctuates from battle to battle. For some scenarios, an infantry unit may represent a legion of fighters, while in other scenarios a unit may represent just a few brave warriors. But the tactics you need to execute conform remarkably well to the advantages and limitations inherent to the various units, their weapons, terrain and time."

"Unlike its older brother, Battle Cry by Avalon Hill (Hasbro), Commands & Colors: Ancients is moderately more complex and contains additional historical details without the battlefield clutter. Most scenarios will still play to a conclusion in less than an hour."

"The battle dice system resolves all combat efficiently and quickly. Each battle die has one Light, one Medium, one Heavy, one Leader, one Flag and one Swords symbol."