This Terrible Sound (The Gamers RSS)

Previous product Product 88 of 94 Next product 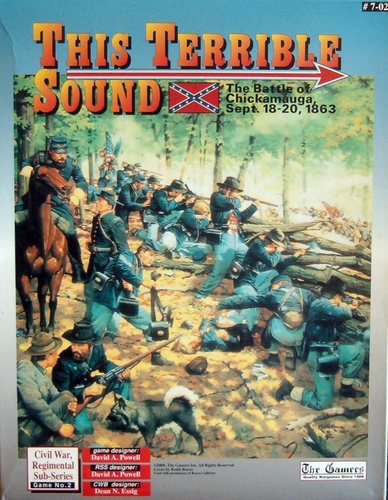 This is it. Like its Top-Shelf sister game (This Hallowed Ground) did for Gettysburg, This Terrible Sound strives to be the definitive Chickamauga game.

Unrivaled in size, scope, accuracy, and development, This Terrible Sound is a game on the battle to be savored and played repeatedly. It uses the popular Civil War Brigade Series rules with a set of specially adapted extension rules for Regimental scale action.

The research for the six maps was done using multiple Park histories, battlefield surveys and county historical maps. These maps show the battlefield (and its environs) in more detail than ever before.

Multiple scenarios in an assortment of sizes make This Terrible Sound "just right" for players of various skill levels and space allowances- it can be as small and quick, or as large and in-depth as just about any player desires. [...]

This Terrible Sound comes with all the popular options you've come to expect from us, including: Major John Mendenhall, Wilder's Brigade, The Reserve Corps Ammunition Train, variant unit and entry, dealing with General Bragg, Wing Commanders, and more...all packed into an over-sized box!