The Tide at Sunrise

Previous product Product 88 of 95 Next product 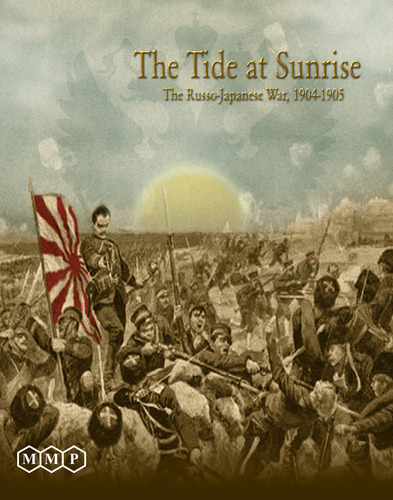 Tide at Sunrise continues the philosophy that began with A Victory Lost. Using tried and true mechanics but with some major twists, Tide at Sunrise will be a major test of player skill that is rarely seen in the wargaming hobby. Here, the base system is little more than the tried and true game from SPI called Napoleon at Waterloo. But not all is at it seems.

Here is the sequence of play:

After the completion of both Player Turns, victory points are determined and, if the Japanese have not won a sudden death win, play continues to the next turn.

The game focuses on two aspects of the actual event. Players have to manage their armies using an abstract logistical system called “Transport Points” in the game. The Japanese Transport Points are an abstraction of the merchant marine force that the Japanese had available in 1904 and 1905. This can be disrupted from Russian naval activity. The Russian Transport Points are an abstraction of the rail capacity of the newly built Trans-Siberian Railroad. Weather can affect this total if there are heavy snows in Siberia. Colonel Akashi can also stir up trouble and reduce the available Russian Transport totals with sudden strikes and riots in the Russian heartland. Both players use these points to bring on new forces and to replace battlefield losses. Finding the right balance of the two uses is key to being successful in the game.

Secondly, players must find the delicate balance between defending and attacking on two separate fronts. How much defends and attacks towards the all-important port of Port Arthur and how much attacks or holds the tough mountain passes of Manchuria - the key to the open plains to the north – where terrain is less defensible and victory points are everywhere.

Victory in the game is determined by success in the naval war, the capture of key terrain objectives and enemy losses.