Previous product Product 74 of 91 Next product 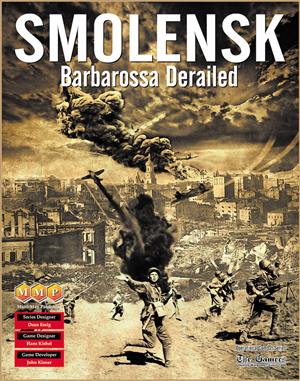 Smolensk: Barbarossa Derailed is the latest release in the Operational Combat Series (OCS), covering the campaign along the Moscow highway in the summer of 1941. These actions set the stage for the Wehrmacht’s autumn drive on the Soviet capital, and many historians believe the bitter fighting here ultimately doomed the Axis to failure in Russia.

The game begins on 8 July with Barbarossa still in high gear. In August, the advance stalls as Hitler diverts most of the panzers from the map to forces around Leningrad and Kiev. Soviet counteroffensives will push Army Group Center close to the breaking point by game’s end on 8 September. The asymmetry of the two armies will be familiar to veterans of past OCS campaigns, especially Guderian’s Blitzkrieg II. There is the expected qualitative difference in typical Action Ratings, along with stark contrasts in logistical capabilities and replacement rates. There also some unique twists in the situation, including:

• Three of the panzer divisions are getting their first taste of combat, so their Action Ratings are reduced.
• The rivalry between Heinz Guderian and Hermann Hoth makes it difficult for these generals to coordinate their panzer armies, and might prevent the ring from closing around Smolensk.
• Soviet tank divisions are shown for the first time. They pack a wallop, but their quality leaves a lot to be desired.
• The Soviet 1st Motorized Division is presented as a somewhat elite multi-unit formation that includes some heavy KV-1s and T-34s.
• The contributions of small militia, tank, and anti-tank units are reflected by the Soviet Alarm Pool.
• Other chrome accounts for ‘tree bark soup’ (used by cut-off units), planes diverted to terror-bomb Moscow, and special markers for artillery ammo & katyusha effects.

Smolensk is a small and fairly simple entry in the series, with special rules kept to a minimum. We think players will enjoy the fact both sides must attack and defend. By the end they will learn three things about this campaign: the Soviets are more than just punching bags, the Germans are challenged to hold their early gains,
and the road to Moscow will be paved in blood.