Previous product Product 5 of 94 Next product 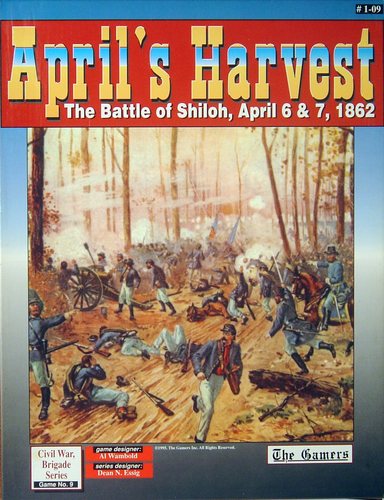 April 6, 1862: The Confederacy must strike back at a host of Union armies that have virtually captured vital Tennessee. The South masses its forces under charismatic Albert Sidney Johnston to strike Union troops encamped at Pittsburgh Landing, on the Tennessee River. These forces are commanded by the North's newest war hero: Ulysses S. Grant.

April's Harvest covers the resulting Battle of Shiloh, the largest bloodbath to that point on the North American continent. The game portrays the whole battle, from the initial Rebel drive through the camps of the surprised Union army, to the Grant's final counterstroke after receiving desperately needed reinforcements.

Special features cover the fighting at the Hornet's Nest, the uncertain arrival of Buell's Army of the Ohio, Union gunboats and Confederate looting. A host of options allow players to see how Shiloh might have been fought if Grant hadn't been surprised, or if the South had received additional men from Van Dorn's Army of the West