Previous product Product 72 of 125 Next product 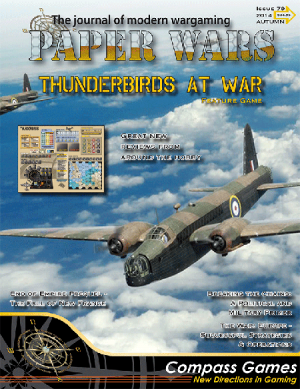 THUNDERBIRDS AT WAR is a solitaire game based on the operational diaries of RCAF 426 Sq. during its first five months of night operations from January to June 1943.

The game recreates events without excessive technical considerations and favors storytelling.  The player chooses his crew, allocates points representing pilot/crew abilities, and, having assessed his strengths and weaknesses, chooses his flight path to the target. Tables and tracks printed on the map sheet provide quick access to information needed and action outcomes. Random events are revealed during flight as are encounters with Luftwaffe and Flak. The player is called upon to make life and death decisions every step of the way, in short, managing mayhem. Nothing in the game is scripted. Most missions play in five to 15 minutes. It is as close as you can get to flying over the Ruhr in a Wellington without climbing into a cockpit.