Previous product Product 56 of 120 Next product 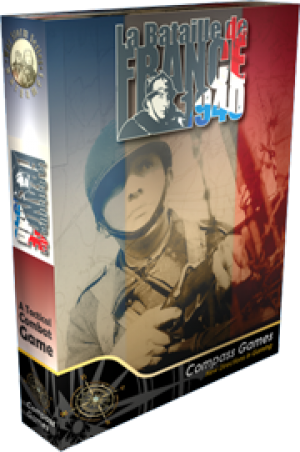 In May 1940, the Second World War took a turn which would change world history forever: the German armies invaded France across the neutral territory of Belgium and The Netherlands. Doing so they avoided the fearsome Maginot Line, behind which the French army, supposedly the best prepared of the era, felt safe and far from danger. France had surrendered against all expectations, in less than two months and the British Expeditionary Force had been evacuated by a near miracle at Dunkirk.

La Bataille de France 1940 recreates the events of those days and allows the players to reproduce the most famous battles of the Blitzkrieg on the Western Front. at a tactical level. Players take command of either the Allied or Axis forces (or can play solitaire) in the tactical battles of each scenario.

The War Storm Series is a game series designed to simulate combined arms company level combat. Each game in the series has numerous scenarios allowing players to simulate a number of company or battalion level combats.

War Storm Series games are based on the principle of simultaneous execution, or simply "WE GO", a hybrid system of turns and "real time". The players must activate unit leaders to perform many actions (fire, assault, move, coordinate, etc). A turn ends when both players have completed all their activations. The scale is company level with units representing groups of between 30 and 40 soldiers, weapons units represents groups of 3-4 weapons and their accompanying crews (20-25 soldiers), and the AFvs-Transports representing groups of 3 to 5 vehicles and their corresponding crews. Scenarios are divided into turns representing about 12-15 minutes of action. Turns are divided into the following phases:

The game uses isomorphic mapboards, each of which are aligned to any edge of equal length on any other mapboard. This allows for an almost unlimited number of combinations to create any terrain situation, including player designed scenarios. Each map hex represents a distance of approximately 150 to 200 metres.

The series rules are easy to understand but each game’s scenarios require a solid application of various strategies to win. The result is a good balance of fun, fast-paced, and exciting game play, using realistic game mechanics.War Storm Series games are highly re-playable due to their variety of unit types, numerous scenarios, varying leader capabilities, and random leader selection, and therefore represent great value for your gaming buck.