Europe in Turmoil: Prelude to the Great War

Previous product Product 37 of 120 Next product 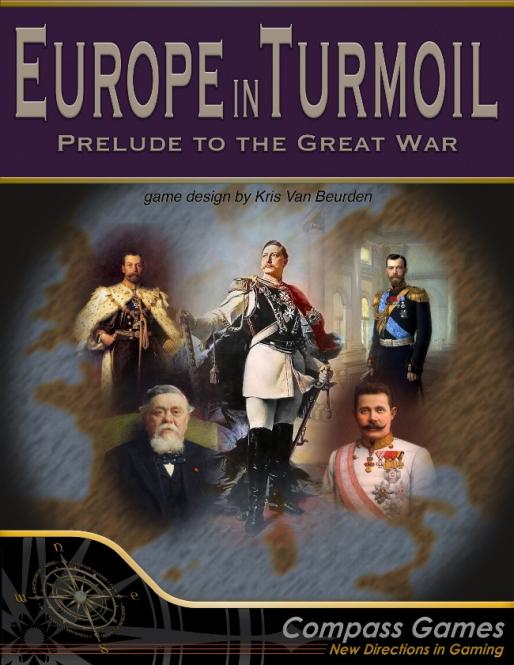 Europe in Turmoil: Prelude to The Great War, is a card-driven game set at the beginning of the 20th Century in which two players each assume the role of a political ideology ascendant in Europe at that time.

One player plays the Liberal. At the start of the game he is especially dominant in the United Kingdom and the French Third Republic and represents not just Liberal but also Pacifist and Socialist principles. His opponent plays the Authoritarian, dominating the three great central-European Empires of Russia, Germany and Austria-Hungary and representing their reactionary, repressive regimes.

The careful Balance of Power set at Vienna in 1815 and maintained by Bismarck is broken when Great Britain and Germany embark on the Naval Arms Race, the dramatic Dreadnought build-up. Belle Époque contains this life-or-death struggle between both players, with several of the game’s stronger cards referring to it (Admiral von Tirpitz, Copenhagenization, Winston Churchill, …)

Further focuses for the Events of the game are the growing anarchy and revolutionary spirit in Europe (represented by a chain of events such as Revolution of 1905, Tsarist Repression, Second Duma Disbanded), the system of alliances that transformed Europe into two factions (represented by amongst others the Entente Cordiale, Franco-Russian Alliance and Dual Alliance evens) and finally the series of crises which led to the outbreak of the Great War (Tangier Crisis, Austria annexes Bosnia, Gavrilo Princip).

The last of these mechanics tie together in the Great War mechanic, where each new alliance and each crisis increase the Tension between the Nations of Europe and potentially escalate to the game-ending Great War phase. Resolution of the Great War is dependent on the Alliances made by your Faction, giving a tension between playing the Alliance Events (thereby increasing the change of war breaking out and the chance of you winning that war) or not playing the alliances (preferring not to rattle the sabers, but at the same time also not protecting yourself from a saber-rattling opponent).

Will the strongly Authoritarian Empires of Central Europe hold out against rising Liberalism? Will the Workers combine forces with land-hungry Farmers and marginalized Intelligentsia to oust the ruling Bourgeois, Nobility and Monarchy? Will “The Great War” break out, shattering the Status Quo? These and other exciting possibilities are now open to players.