The Devil's To Pay

Previous product Product 50 of 55 Next product 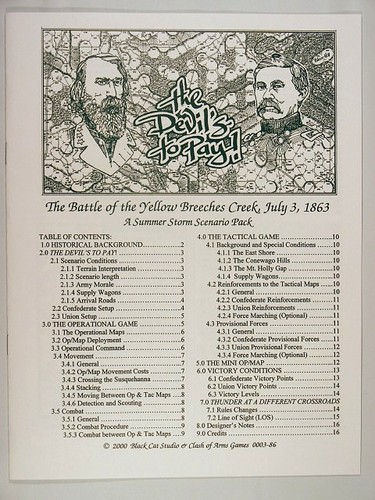 The Battle of the Yellow Breeches/Dillsburg, July 3,1863
An Expansion module for Summer Storm.

The body hung limply from the roadside apple tree, as General Buford and his staff rode by. "Well, gentlemen," Buford noted grimly," I guess that's one more report that General Lee will have to do without!"

The Gettysburg Campaign remains a source of endless interest to both historian and wargamer, in part for the many ways in which small acts of fate worked to shape the course of larger events. THE DEVIL'S TO PAY explores a little known, but quite plausible, alternate chain of events turning on one such small incident.

Longstreet's scout Harrison ends up swinging from an apple tree, festooned with one of John Buford's famous 'let him hang for 7 days' notes. Bereft of the knowledge that the AoP is NORTH of the Potomac and hot in pursuit, General Lee simply continues as before for a few days longer, with his 3 Corps following the orders that he had already historically given them. Ewell attacks the Harrisburg defenses, which fall after a day or so. The bridges are burned, but with the shallow water and fords, the city itself is taken a couple of days later (helped by Jenkins' taking of the Rockville RR bridge to the north). However, the Pa Reserves (Crawford's Division) have been rushed north from the Washington defenses, and with their help Couch has drawn a defensive line along the Swatara Creek, a few miles to the east of Harrisburg. Early moves north from York along the Harrisburg Pike, which follows the river from York Haven. Hill, and then Longstreet follow Ewell down the Cumberland Valley (to the NE) towards the Pennsylvania capitol. By July 2nd, the Confederate Army is badly strung out; Ewell has two of his Divisions (Rodes & Johnson) across the Susquehanna, with the third (Early) holding the West Shore. Hill is a couple of miles west in Mechanicsburg/Shiremanstown with Anderson's Division, while Heth and Pender's Divisions are ranged to the south holding the wide 'gap' at Dillsburg. Longstreet has two Divisions in Carlisle (Hood's & McLaw's), while Pickett is still a few miles to the west guarding the ever-lengthening supply line running south to Virginia. Jenkins' coup de main has resulted in the immense Union supply base at Harrisburg being captured almost intact, and every wagon that makes it west over the shallow ford means another day of supplies for the ANVA in the fall and winter to come.

With the Confederates now further to the north, the AoP continues to move forward on the Gettysburg/Hanover/Manchester line it had reached by June 30th. By the evening of July 2nd, Buford's Cavalry is skirmishing with Heth's troops in the Franklintown area. Reynolds has passed Petersburg (York Springs) and is moving forward with the I & XI Corps, with Sickles' III Corps and Merritt's Reserve cavalry Brigade in position to threaten the Mt. Holly Gap a few miles to the west, on the direct route between Gettysburg and Carlisle. Spurred on by the fall of Harrisburg, the rest of the Army of the Potomac is steadily marching north as well, it's concentration greatly aided by the convergence of all the main roads north at Dillsburg. The Union intelligence arm has been working overtime, and General Meade has been handed an opportunity bigger than that which faced McClellan at Frederick nearly a year before. The Confederate Army is stretched over 20 miles, from west of Carlisle to east of the Susquehanna; if he can get the Army of the Potomac through the gap at Dillsburg in force before Lee can concentrate, he will split the ANVA in two with a good chance of cutting the bulk of it off, 100 miles north of the Potomac.

Stuart has continued to bounce off of the right flank of the marching Union Army, and has finally followed Early over York Mountain and back into contact. Lee now knows the true danger of his position, and hurriedly orders Ewell to get his troops back across the river while the rest of the Army rushes to reinforce the troops holding the vital gap. Apprised of the situation, Couch endeavors to maintain contact, using Crawford's veteran troops to slow Ewell's withdrawal as much as possible.

Essentially, this scenario is very similar to the Battle of South Mountain in '62, except that the 'gap' is far wider and less defensible and the stakes, if anything, are even higher! A desperate defense/attack, coupled with wildly variable reinforcements should make for a game with quite a bit of replay value! The Union player must mount a furious attack with his arriving troops, regardless of casualties, knowing that he has a chance to strike a war-winning blow. The Confederate player must form a desperate, collapsing defense on several fronts, while trying to extricate both Ewell's troops and as many supplies as possible from his foothold on the east shore of the Susquehanna.

THE DEVIL'S TO PAY Contains:

* You must own Summer Storm to play The Devil's to Pay