Previous product Product 88 of 97 Next product 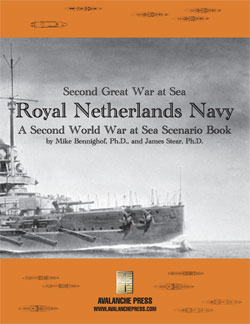 Return to the world of the Second Great War, where Wilson’s Peace ended the First Great War on Christmas 1916. Twenty-four years later war returned to Europe, with Russia, France and Italy seeking to overturn the settlement with a war of aggression against the Central Powers of Imperial Germany, Austria-Hungary and the Ottoman Empire.

Royal Netherlands Navy is the third book in our alternative history series, The Second Great War. In the first book, The Kaiser’s Navy, we looked at the High Seas Fleet of 1940 and its campaigns in the North Sea and Atlantic. In the second, The Habsburg Fleet, the Imperial and Royal Austro-Hungarian Navy, alongside its Turkish allies, wages war in the Mediterranean Sea.

In this volume, the fleet the Dutch admirals hoped to build in our world, but could not get approved, finds itself pressured by the Japanese in the Far East and the British and French in Europe. Defending their rights with armed force, the Dutch find themselves drawn into desperate battles in the North Sea, North Atlantic, South China Sea and the interior waters of the East Indies.

In the 1930s, Dutch shipyards stood at the leading edge of naval technology: Dutch submarines first deployed the schnorkel breathing device, for example, and Dutch warships boasted the sophisticated Hazemeyer fire control system that would be enthusiastically copied by the Royal Navy and others. The Netherlands had the industrial and financial means to create a large and modern fleet, and the oil wealth of Borneo and Sumatra provided the motive. Seeing deficits as a more lethal enemy than the Axis, the Dutch government of our reality doomed both the home country and the colonies to defeat and occupation. In the world of Wilson's Peace, things are a little different.

There are 210 die-cut and mounted playing pieces from the old, out-of-print Spice Islands booklet, and 90 brand-new laser-cut pieces (scorchless and sootless!) for 300 total: 120 double-sized "long" ship pieces and 180 standard-sized ones representing task forces, aircraft and smaller warships. The Dutch fleet that never was is present, along with French, British, Japanese and German ships, aircraft and airships. Yes,airships!

There are also thirty new scenarios based on the battles that might have been waged by the Royal Netherlands Navy in this alternate world, plus more of the story of the Second Great War begun in The Kaiser's Navy and continued in The Habsburg Fleet. This module is not playable by itself, but requires ownership of Bismarck, Strike Southand The Kaiser's Navy to enjoy all of the scenarios.