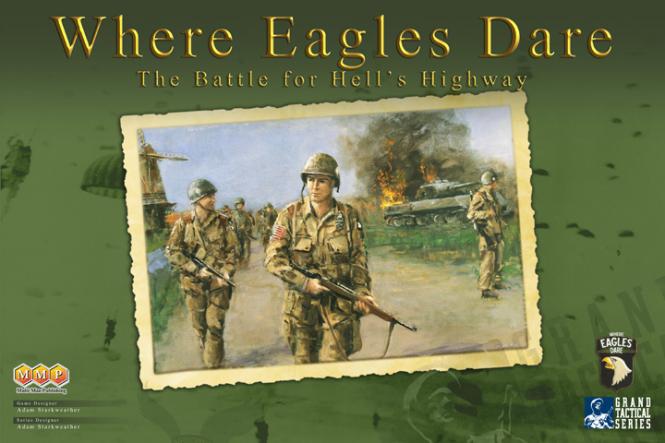 The eagerly-awaited sequel to The Devil’s Cauldron, Where Eagles Dare completes the Market Garden saga and allows players to play out the entire operation. In addition, Where Eagles Dare is also a complete and standalone game and offers a fascinating game situation in which the outnumbered, elite 101st Airborne division must race from emergency to emergency to maintain the vital lifeline to the British 1st Airborne Division fighting for its life in Arnhem. This single and fragile lifeline would come to be called “Hell’s Highway”.

Where Eagles Dare: the Battle for Hell’s Highway is the next game in the Grand Tactical Series of company level games offered by Multi-Man Publishing. The game will also introduce new terrain types and new special rules to fully explore the battle. Where Eagles Dare will introduce a special off map movement system to allow the Germans to move forces from sector to sector of the battlefield and a host of other rules to make this game as unique and interesting as The Devil’s Cauldron.

Scenarios will include the following famous historical actions:

All the attention to detail and the same graphic style that has eaned The Devil’s Cauldron much praise within the wargame community will also be seen in full force in Where Eagles Dare. From the unknown Dutch farmer that misdirected the dvance of powerful Panther tanks on the Son Bridge and may have saved the entire operation to the German air raid on Eindhoven that stalled the advance up Hell’s Highway during a crucial moment in the fighting, Where Eagles Dare will feature many little known tidbits of history that made this battle so unique.

Where Eagles Dare: the Battle for Hell’s Highway contains: