Heights of Courage (The Gamers SCS) 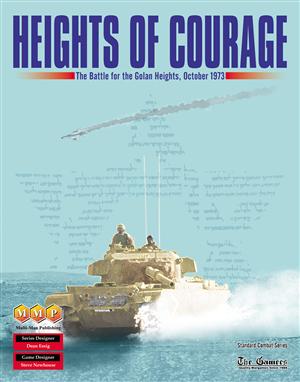 In October, 1973, Syria and her allies lead a surprise attack to recapture the Golan Heights in conjunction with an Egyptian assault across the Suez Canal into the Sinai. Heights of Courage is a game covering the Golan Heights portion of this war—one of the largest armored clashes to occur since the end of World War II.

For a little over two weeks, massed Syrian armor tried to swamp the Israeli defenders who were buying time to allow mobilized reserves to arrive. They succeeded and managed to turn the tide launching their own offensive toward Damascus.

Heights of Courage is the 15th game in the award winning Standard Combat Series. It complements the 1995 CSR award winning game Yom Kippur (which covers the fighting in the Sinai). It uses the same 8 page standard series rulebook applicable to all the other games to bring out the action in a “beer and pretzel” way familiar to all wargamers.
Because both sides have offensive and defensive phases of the battle to enjoy, victory is determined by comparing the best Syrian performance in their early offensive to the Israeli offensive results at the end of the game. This forces both sides to fight tooth and nail on both the offense and defense with enormous time pressure on perform rapidly.
Designer Steve Newhouse (previously part of the team that created The Mighty Endeavor) gives all the sizzle of the fast-paced armored battle with enough steak to give the game the appropriate level of depth. For example, he gives an innovative two tempo operational speeds to both players as the battle goes beyond the endurance of the forces involved.  Each player can select to go “fast” in order to fight more or “slow” in order to get more replacements.
While Heights of Courage cannot be directly linked to Yom Kippur, the game provides rules to allow players to play both games in tandem so as to play the “whole war.”
Scale: Each turn is between 1/2 to two days (depending on when in the battle the turn represents). Each hex is 1 mile across. Syrian units are battalions and brigades. The Israelis are shown as task forces which range from half battalion to company sizes.
Four scenarios allow different looks at the 17 turn campaign (turn length varies based on when a cease-fire occurs).
The fate of Israel hangs in the balance. Are you up to the task?
Components: