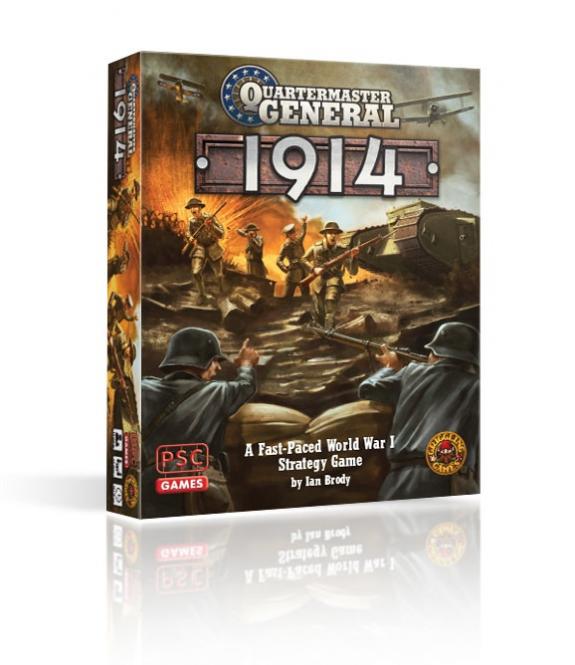 Quartermaster General:1914 is creating a narrative of the First World War in Europe, reflecting the military, technological, and social changes that occurred over the following four years.

1914 is the next title in the critically acclaimed Quartermaster General series by Ian Brody. The game plays between two and 5 players, and takes about an hour and a half to play. If you don't know the Quartermaster General series, these games are light, card-driven wargames, but with an emphasis on teamwork. The games play like Euro strategy games, and are enjoyed by wargamers and non-wargamers alike.

Based on the innovative card driven mechanics to be found in the original Quartermaster General game, Ian has cleverly adapted and modified the core engine to reflect the flavour and the First World War to give another brilliantly exciting, easy to learn, fun game with a lot of replayability. Each game in the Quartermaster General system differs to reflect the conflict being represented.

In 1914, each player may have numerous prepared cards to help in battle or attrition. The players have much greater control over how fast they move through their decks, always looking to find some advantage to wear down the opponents. In 1914, each card has two different uses, one when played, the other when prepared. On your turn you'll have the opportunity to both play and prepare a card. You can also spend cards to draft more troops, or use cards to degrade your opponents by attrition. However your deck represents your overall resources, so moving too quickly through your deck early might result in your unsupported armies being swept away in the final rounds of the game. Worth it, if you can capture Berlin or Paris in 1915, but if your gambit fails, you may have a tough road ahead. The game ends after 17 rounds of play, or earlier if one side has a commanding lead. Because the deck is reshuffled each game, no two games are alike!

The PSC Games plastics and graphics design teams have designed some beautiful plastic playing pieces and have used the same talented artist for the card, board, box and rules artwork as the original Quartermaster General.