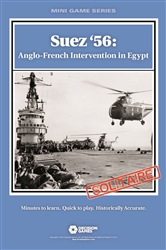 Suez ‘56 places you in command of British, French, and Israeli forces in Operation Musketeer, the invasion of Egypt. The historical objective was to regain control of the Suez Canal and potentially remove Egypt’s President Nasser. Your mission is to achieve those objectives while avoiding the political debacle that marred the actual event.

The game uses the Cold War Blitz series rules, a solitaire game system. You command the allied units, and have a deck of cards to enhance your unit capabilities. A second deck of cards, drawn randomly one at a time, controls Egyptian (OPFOR) activities. Combat is resolved with a quasi-tactical system with opposing units firing at one another. The game ends after the last turn, but you control when that is through the judicious play of your cards (the OPFOR cards can affect it too).