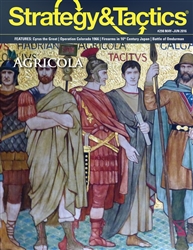 Agricola is a wargame of the campaign fought by Gnaeus Julius Agricola, the Roman governor of Britain (AD 77-85) to conquer northern Britannia (modern Britain). There are two players, the Roman and the Caledonian (the latter actually representing various northern British tribes). Each player has units that represent military formations or tribal warbands. Players move their units, conduct battles and objectives.

Each player has a set of Stratagem markers. Players use these markers to recruit new units, move their forces on the map, and take special actions. Whenever opposing forces are in the same hex, a battle will ensue. Various Stratagem markers can also be used to enhance operations.