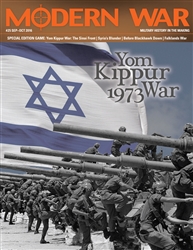 
October War is a wargame of the 1973 Arab-Israeli War. There are two Theaters of Operation: Sinai and Golan, both portrayed as a point to point system (since most of the major actions were fought over key points or lines of communications). There are two players in the game, one commanding the Israelis, and the other the Arabs, and the game emphasizes critical factors of the conflict, but allows for large units to break down into smaller units, representing organizational flexibility and cohesion. The game is driven by the drawing of event markers which represent major tactical and strategic factors that affected the course of the campaign historically.