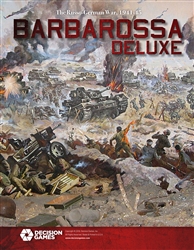 A strategic-level, two-player “mini-monster” of intermediate complexity, designed by Ty Bomba, covering the entire Russo-German War. Play may end sooner than the historic termination time, if the German player is able to do significantly better than his historic counterparts by advancing so quickly he causes the overall political, social, economic and military collapse of the Soviet Union. Likewise, if the Soviet player is able to carry out his strategic comeback more efficiently than did historic counterparts during the second half of the war, the game may again end earlier than it did historically.

Each extra-large hexagon on the two-sheet map represents 55 miles. The large-size counters provide corps as primary units of maneuver for the Germans, while for the Soviets they’re armies. The full order of battle is the most complete ever published in any simulation at this level.