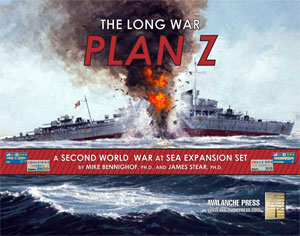 During the late 1930’s, the German Kriegsmarine came up with a plan for a powerful new fleet, built around several aircraft carriers and a half-dozen huge battleships, with flotillas of supporting cruisers and destroyers. Admiral Erich Raeder called this ambitious program Plan Z, and looked to complete it sometime in 1948. When war actually broke out in 1939, none of these ships had been completed or even started.

Plan Z is a massive expansion set for Second World War at Sea, kicking off a new alternative history setting we’re calling The Long War. It features the ships and planes of Plan Z, pitting them against the Royal Navy and the additional ships and planes of its own building plans.

There are 510 brand-new die-cut (and silky-smooth) pieces. The huge H-class battleships are here, M-class cruisers, P-class battle cruisers and much more.

There are also thirty new scenarios based on the battles that might have been waged in the North Atlantic in this alternate world. This module is not playable by itself, but requires ownership of Bismarck, Arctic Convoy and Sea of Iron to enjoy all of the scenarios.