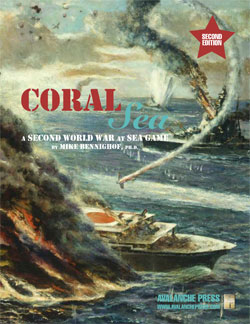 In May 1942, the Japanese sought to capture Port Moresby on the south coast of New Guinea and interrupt communications between the United States and Australia. Such a move, they hoped, would bring the Americans to battle.

The United States Navy needed no special inducement to fight the nation’s enemies. Two American aircraft carriers met one small and two large Japanese carriers in the world’s first battle between these powerful new warships. For the first time in naval history, a major battle was decided with no warship of either fleet even sighting an enemy ship directly. Aircraft were the new measure of naval power.

Coral Sea is the gateway to the Second World War at Sea series. The new Playbook edition has everything you need to play, all inside a book: the rules, pieces, maps and charts are all there, except the dice (you’ve got plenty of those). And we tell you how to play the game, and how to best enjoy it. Second World War at Sea is the best-selling series of naval board wargames ever, and Coral Sea will get you right into the fun.

It’s an evenly-matched battle (the Japanese have one more aircraft carrier, but it’s a little one and the American flattops have more planes), with the Japanese trying to seize bases in New Guinea and the Solomon Islands and the Americans out to stop them.

The operational map covers the Coral Seaoff northeastern Australia as well as surrounding waters. You move your ships and planes on this map and search for the enemy. When you find them, you fight them on the tactical map.

Second World War at Sea is a simple and fun game series, built around the insightful concept of rolling a 6 on a die. Yet with that simple mechanic, it manages to include all of the important aspects of World War II naval combat (surface warfare, submarine operations, air missions and more). It’s a historically sound model (believe it or not, World War II admirals did not calculate the angle of a shell’s fall against the thickness of a ship’s armor) and it’s fun to play. Coral Sea will introduce you to this world of historical fun, that covers every theater of World War II (and a few more that never actually happened). Come join us.