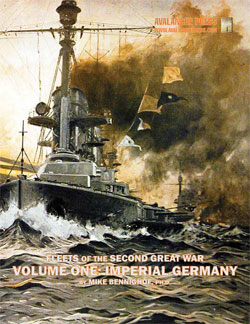 In November 1916, newly-reelected U.S. President Woodrow Wilson attempted to negotiate an end to the First World War. He failed, and the war went on for two more years, killing millions and destroying Europe’s great empires. In our Second Great War alternative-history setting Wilson succeeds, sparing both those lives and the empires.

Our Second Great War at Sea expansion sets (as well as a complete game) bring this story to our Second World War at Sea game series. New ships, new aircraft and even new fleets see action in the Second Great War – it’s a battleship war, also featuring airships and biplanes.

Since the series debuted, hard-core fans have wanted to know more about those ships, planes and fleets. Fleets of the Second Great War is a series of sourcebooks doing just that. The first of them, Imperial Germany, tells all about the ships, airships and naval airplanes of . . . Imperial Germany.

The Imperial German Navy, usually called the High Seas Fleet (the proper name of its sea-going surface element), is one of this world’s most powerful fleets, with ships ranging from modernized veterans of the First Great War through new fast battleships. While these ships never existed, we’ve designed them along the lines of German warship development and these are our best guess at what Imperial Germany would have built had the regime survived.

In the book, each warship class (most of them found in The Cruel Sea), with some from upcoming expansion sets) is described, with ship data similar to that found in warship guides of our own world, and some schematics of their design.

It’s a fun add-on to The Cruel Sea and other Second Great War games, filling out the background and making this world that never existed a little more real.