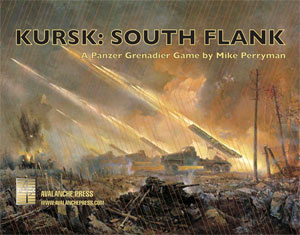 In July 1943, history's greatest tank battle erupted when the German Army hurled 50 divisions at the Red Army around the city of Kursk, including 17 panzer and panzer grenadier divisions with over 3,000 tanks. Long aware of German plans, the Soviets were ready and waiting, with heavily fortified lines backed by 3,600 tanks of their own.

In this game the German SS Panzer Corps assaults the lines of the Soviet 40th Army, only to meet fierce counter-attacks from the Sixth Guards Army and First Tank Army. Pieces include masses of tanks: Lend-Lease Grants, T-34 tanks in three models, T-70 light tanks and more. The SS counter with Tigers, mobile artillery and a whole lot more.

There are four semi-rigid mapboards, just like those found in August 1914 or 1940: The Fall of France.