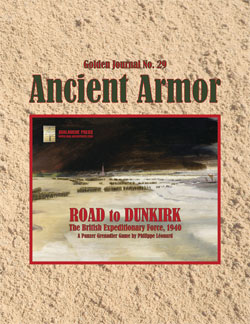 Our new-model Golden Journal features a “real” booklet, just like a small magazine, and a small set of die-cut, silky-smooth playing pieces. Our 29th issue features the original American tanks, the license-built Liberty heavy tank (a copy of the British Mark VIII) and M1917 light tank (a copy of the Renault FT17). Though they remained in storage in 1940, they saw no World War II combat action. Until now.

Neither tank entered service before the end of the First World War. The U.S. Army took delivery of 100 Liberty tanks and (counting Renault-built tanks) over 1,000 of the M1917. By the early 1930’s the heavy tanks had been retired, with the light tanks soon following. In 1940 the heavy tanks fell victim to mobilization scrap drives, along with many of the light tanks. Others went to Canada for use in training units.

In Golden Journal No. 29: Ancient Armor, they can avoid that fate and finally serve their country (though maybe not very well). You get 24 new die-cut and silky-smooth playing pieces, with the M1917 light tank in both machine-gun and cannon variants, the Liberty heavy tank, the variant Mark IX armored personnel carrier (built by the British, but not by the Americans) and some American infantry still armed with the M1903 Springfield bolt-action rifle.

And you get to play with them, in scenarios sending the American armor to Ireland in 1940 and Guam in 1941, to fight the British and the Japanese.