By Stealth and Sea, Core Game 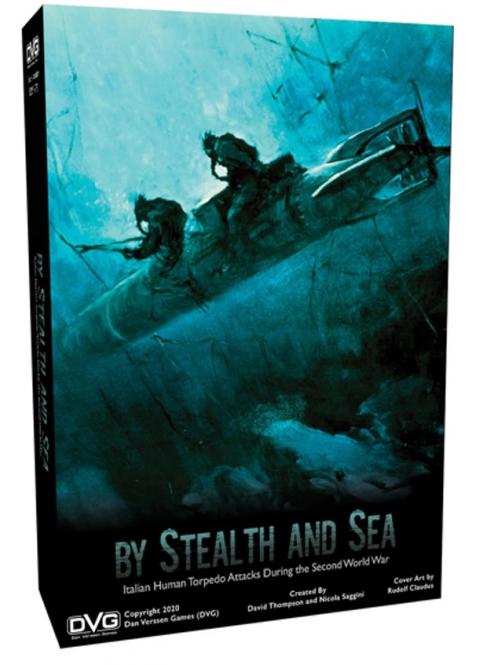 By Stealth and Sea is a solitaire or cooperative game that takes place during the Battle of the Mediterranean in World War II.

In By Stealth and Sea, you lead elements of an Italian commando frogmen unit called Decima Flottiglia MAS. Under your command, teams of frogmen will pilot manned torpedoes in attacks against the Royal Navy in the heavily guarded harbors of Gibraltar, Algiers, and Alexandria.

By Stealth and Sea’s campaign system features all nine key historic manned torpedo attacks by the Decima Flottiglia MAS against the Royal Navy. During the campaign, you can advance your technology and train your frogmen, but the Royal Navy responds to successful attacks by improving their defenses.

The remarkable accomplishments of the Decima Flottiglia MAS served as a model for other naval special forces for years after World War II. Will you be able to match these historic results? Or will you succumb to the defenses of the Royal Navy?

By Stealth and Sea was created by David Thompson and Nicola Saggini. David's previous designs with DVG include Pavlov's House, Castle Itter, and For What Remains. He has also designed War Chest and Undaunted: Normandy. Nicola is known for his translation work: Greater East Asia Co-Prosperity Sphere and Fury at Midway> from Japanese, and Here I Stand and the soon to be published Falling Sky from English to Italian. By Stealth and Sea is his first published design.

In By Stealth and Sea, you can play stand-alone, historically accurate missions or you can play a campaign. In an historic campaign, you play through all of the missions in order, comparing your results with the historic outcome. In a custom campaign, you increase the proficiency of your operators, improve the technology of your SLCs and other equipment, and make other advancements such as establishing new forward positions for your operators. In response, the Royal Navy will make significant improvements to their harbor defenses.