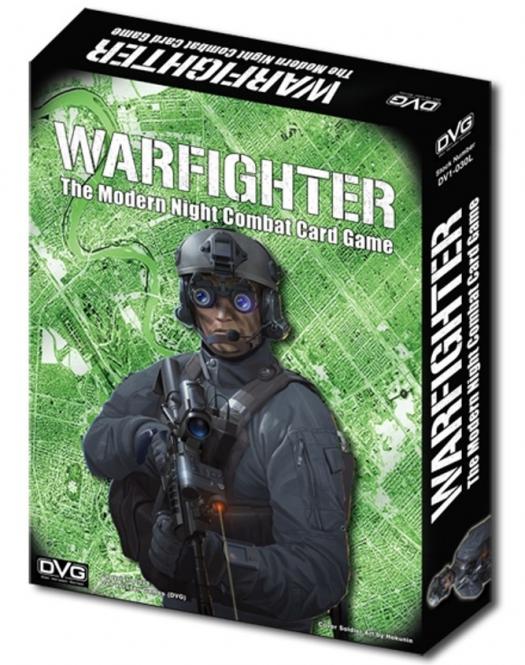 Warfighter is a card game for 1 to 6 players. You play cooperatively with your friends against the system to complete Modern Special Forces squad-level combat missions.

The core game gives you a full team of US Soldiers and a full set of North Korean Hostiles. Each Expansion then adds to these sets.

In addition to the Shadow War boxed game and Expansions, this Kickstarter will also include many day combat Expansions! This includes new Nations as well as new Adversaries!

At the start of each mission, you each select one or more Soldiers, equip them with skills, weapons, and combat gear within the mission's Resource limit. You then fight your way through hostile territory and engage enemy soldiers, as you attempt to reach and complete your mission objective. Every mission is a stand-alone game. You build your Soldiers, select your Gear, and then run your mission. Within 30 to 60 minutes you will have succeeded or failed.

Warfighter uses a new combat system that takes into account the fire mode you select for your weapon, range to the target, running out of ammo, suppression fire, and cover - all in the same dice roll!

This system creates an incredibly deep narrative with every attack. As you eliminate soldiers, you gain experience to Upgun your Action cards, play Support cards, and activate special Skills.

We've added an interactive Noise system to the game. Every time your soldiers move or attack, they generate Noise, and the Hostiles have a chance to hear your team. If the Hostiles ever hear you, they will attempt to run for the alarm that will alert the entire base. During those precious few actions, you must do your best to down the Hostile before they reach the alarm and make your mission much more difficult to complete.

Player Soldiers are the stars of the movie. You get to see all their details and really get to know them. They get Health, a hand of Action cards, Skills, detailed Weapon cards. These are the guys you know up-close and personal.

Non-Player Soldiers are the sidekicks and best friends of the stars.

Non-Player Soldiers have a cost and you purchase them at the start of a Mission as you would a Player Soldier. The NPSs don't hold a hand of Action cards. They have Weapons, Equipment, and Skills, and you use them as normal. They also have a number of Actions per turn based on their current Health. Instead of relying on Action cards for defense, they use the same Cover rules as the Hostiles.

This makes them much easier to run, and allows you to easily expand your squad.

Squad Soldiers are the guys standing in the background.

Their soldier cards include all their game info. They do not use other cards or Action cards. These Soldiers make it very easy to command an entire squad with a single player. They are also a great way to get new players into the game.

All of the following components are included in the Core Game!