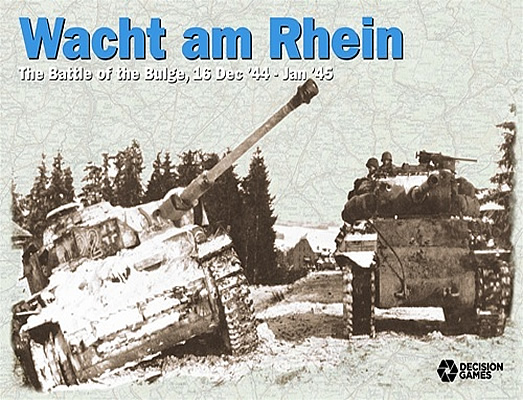 WACHT am Rhein, the Battle of the Bulge, is a grand-tactical simulation of that enormous battle. The more than 2,380 counters represent every formation, at company and battalion levels, which fought there, including US, German, British, French, Canadian and Belgian units. Infantry, armor, anti-tank, reconnaissance, engineer, assault gun, howitzer, rocket, parachute, ranger, glider and headquarters units are all fully represented. The four maps are an accurate representation of the region. Compiled from 1944 German staff maps and 1943-44 1:50,000 US Army maps, they shows all roads, trails and other types of terrain, along with all the towns and villages that became bastions of the American defense, as well as every creek and river that couldn’t be crossed by wheeled vehicles without a bridge.

PLAYERS may use single maps for six smaller scenarios. There is also a campaign game that utilizes all four sections and portrays three weeks (50 game turns). In that one the Germans race for the Meuse, the last hurdle before the open country leading to Antwerp, in the face of increasing concentrations of Allied infantry, armor and air power. Extensive supply, weather and air power rules are included.

THIS edition of Wacht am Rhein presents modifications to the combat, artillery and supply systems of the first edition in order to better depict tactical and operational warfare. For example, an “exploitation mode” has been added in order to allow mechanized units to take advantage of breakthroughs in the enemy line. Other changes include the addition of “vantage points,” which function as high ground, enabling units to spot more effectively for artillery, as well as “constricted terrain,” which represents the channeling caused by steep gullies and ravines.

• Units: Infantry and Artillery units are battalions. Armor is depicted at the company level.