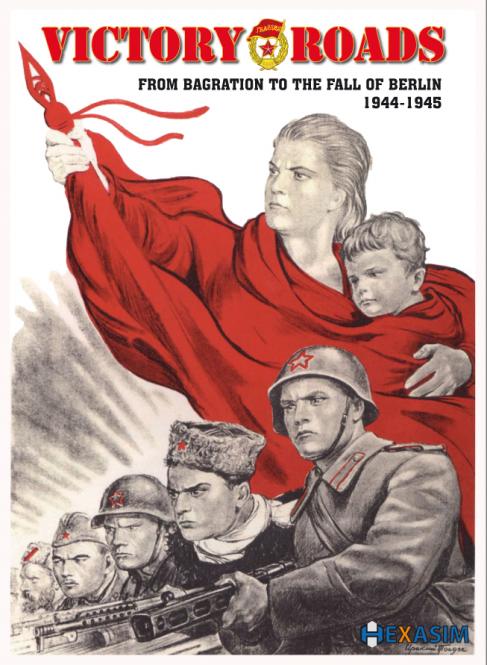 June 1944, the Allies have finally opened the second front demanded by Stalin. The Red Army then launches the Bagration operation. Bringing considerable resources, over 2 million men and 4,000 tanks, it aims to liberate Byelorussia. Taken by surprise, the German Army Group Center collapses quickly. The Soviets then advance 600 km in a month, causing an unprecedented defeat to the Germans. They are stopped at the gates of Warsaw, where the insurgency that has just started will be ruthlessly suppressed.

But the Axis forces are not yet beaten and 10 months of fierce fighting will be necessary until the final victory.

Victory Roads is a historical simulation retracing the campaign on the Eastern Front, from June 22, 1944, the day of the launch of the offensive Bagration in Byelorussia, until May 1945 in Berlin.

Victory Roads uses the same game system as Liberty Roads, our wargame on the Western Front, from the D-Day to April 1945, while integrating the specific characteristics of this campaign. The counters are the divisions (Axis) and corps (Soviets) of both sides involved in the campaign.

The system focuses on the different structure of the two opposing armies. Supports represent the effects of various materiel, equipment, as well as specific battle events.

Players who are used to play with Liberty Roads should find Victory Roads very familiar.

The main difference the game offers relies in the way to handle the Soviet player’s offensive. A TO marker represents an area of logistic and administrative support from the Chief Commander of Stavka. Theaters of Operation markers are somewhat similar to PLUTO markers although slightly more tricky to handle. They