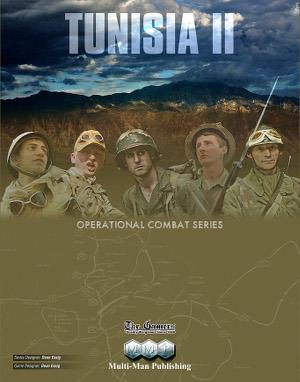 Tunisia II is an Operational Combat Series game covering the campaign in Northwest Africa from November 1942 through May 1943. This new edition is similar to the original game from 1995, but features a revised order of battle, modified rules, and new maps. We are really happy to get this classic design updated and back in print! The tempo of play is just outstanding, beginning with just a few units in play. Over the next few months both sides rapidly reinforce the theater. The build-up culminates with Rommel’s offensive at Kasserine and tension over the variable entry of Montgomery’s 8th Army. This climax is followed by the slow destruction of Axis forces in North Africa.

The upgrade of this game involved a handful of important decisions. A straight reprint was out of the question, since the original was designed back when the OCS v2 rulebook was fairly new. In Tunisia II we standardize how the game should be played with the latest series rules, and also have updated it to “fit” better with newer OCS games. So units and rules have been changed to conform to games also set in 1942-43: DAK II, Case Blue, and Sicily II. Recent work on Beyond the Rhine is also factored in.

Here are some of the game’s highlights: