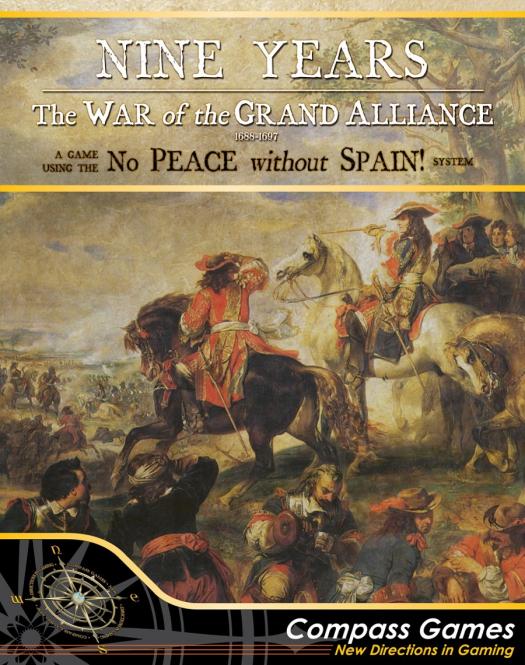 In 1688, Louis XIV embarked upon a war of aggression later called the NINE YEAR's War or the War of the Grand Alliance. At the same time, supported by influential British political and religious leaders, Wiliam III Prince of Orange crossed the Channel to invade England, deposing the English King James II, his father-in-law in the "Glorious Revolution." The War of the Grand Alliance is a companion game to No Peace Without Spain. A new countersheet provides additional leaders (for such commanders as William III, duke of Luxembourg and Vauban), additional corps and additional fleet counters while a set of new event cards allow the players to recreate the most famous incidents of the war such as the Pacification of Scotland, the naval battles of Lagos and Beachy Head and the Death of Louis.

Nine Years: War of the Grand Alliance 1688-1697 offers some additional options such as fighting in the Northern American Colonies, where the conflict was known as King William's War, naval battles in the Atlantic between the Bourbon and Allied Atlantic Fleets and special rules for invading England and -newly present- Ireland. Victory points are still gained or lost by the Alliance player, but with new features. Peace negotiations are influenced by the board position in Spain, Germany, Ireland and England.

This Stand alone game uses the No Peace without Spain System, also contains a campaign game combining the components and scenario rules of both the Nine Years: War of the Grand Alliance 1688-1697 and NO PEACE WITHOUT SPAIN games into one epic scenario running from 1688 to 1713 for the epic scenario ownership off both games is needed. Now players can recreate one of the decisive moments in European history, as France begins its long slide to revolution, Austria enjoys its last moment of continental dominance, and Britain asserts itself as the preeminent economic power of Europe.

Will Louis XIV assert French hegemony? Will Austria prevail in central Europe? Will England continue as a Bourbon ally or become "Great Britain.?" These and other possibilities are now open to players.

Note: Ownership of both games in the Series allows one to play the campaign game linking both scenarios.