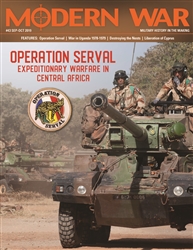 Operation Serval is a two player game covering the campaign in Mali in West Africa during 2012 and 2013, which saw Islamist forces seize control of the northern part of the country and then threaten the capital at Bamako. A French expeditionary force intervened, counterattacked, and along with various African allies, routed the Islamists in a short and sharp campaign.

This is a two-player game where one player commands the French Coalition and the other player the Islamists. Each side's forces include several contingents of allied forces. The game has two scenarios: one deals with the entire campaign; the other with the French intervention. Each hex is about 50 kilometers across. Each turn represents anywhere from one week of intense combat to a month or two of refitting and regrouping. Ground units represent companies, battalions and groups of irregulars (anywhere from 100 to 500 fighters).