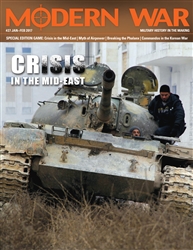 Players control actual and hypothetical combat units utilizing a wide range of technologies and forces to gain objectives. Modern Battles includes two games: Kaliningrad, covering a hypothetical Russian clash with NATO forces at the Russian Baltic Fleet forward base, and Mosul, a clash between ISIS and Coalition forces in Iraq. There are two players in each game, commanding opposing forces. Both games use a main body of shared rules, and each also has its own scenario special instructions.