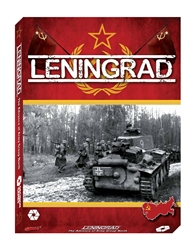 Leningrad recreates one of the most critical campaigns of the Second World War--the drive by German forces to capture the Baltic seaport of Leningrad and trap the Soviet fleet. An easy-to-learn rules format allows players to get right into action. Based on the award winning Panzergruppe Guderian game system, Leningrad features enough surprises to ensure that each game will be different and exciting. All of the elements of battle--air power, panzer corps, and mechanized infantry, among others-- have been incorporated into the game. All Soviet units are untried and their combat strength is unknown to either side until they are first tested in battle. Surprise attacks are essential to the success of either side, and the arrival of reinforcements can dramatically shift the course of battle.