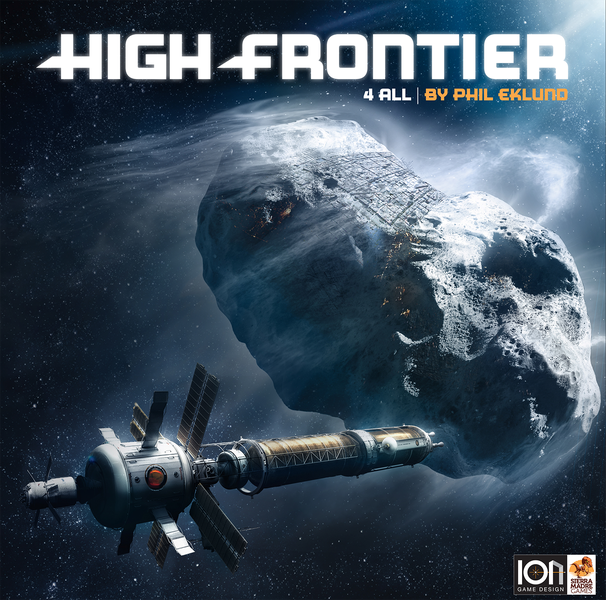 This is the 4th edition of Phil Eklund's signature game High Frontier. When Phil started working on High Frontier's predecessor, many years ago (Rocket Flight in 1978), he envisioned players as space entrepreneurs in 2020 trying to profit in trade and technology development in space, with water as the basis for rocket travel. Three versions of High Frontier have passed. We are now at this year, 2020 and High Frontier 4 All will turn High Frontier into:

High Frontier 4 All is a space exploration game at its core. Each turn you perform 1 action (called an operation) and 1 movement (provided that you have launched a rocket). Throughout the game, you use an engine-building mechanism to combine different components (called patent cards) into a rocket or sail. The spirit and hazards of exploration and prospecting are recreated by map icons. The map is entirely revealed but your particular designs of rockets, refineries, and robonauts determine the best places to attempt glory, prospecting, industrialization, and eventual colonization. The factory products you produce will guide your strategy onward in the game.

The mechanisms may be relatively simple, but the combinations of designs and explorations guarantee that no two games will be the same.

Victory points are primarily earned through the number of your ending map tokens, science value of your colonies, and your factory's stock prices. The modules introduce other paths to victory, including politics, space colonies, starships, and special quests called futures.

High Frontier is a game of uncompromising hard science, but with an emphasis on narrative experiences. This has the effect of creating unscripted stories while playing against the harsh realities of space as much as against opponents. You will not find a more detailed map of the solar system anywhere, and the physics is real enough that you feel part of real stories and missions.