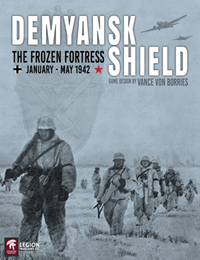 Historical Setting - From 22 June 1941 Axis armies attacked the Soviet Union on a broad front. While the northern group of armies (Army Group North) pushed towards Leningrad in a war of rapid maneuver its 16th Army covered the flank in the Lake Ilmen – Valday Hills area. Here, fighting began to settle down in early fall 1941 and by January had become static. Then the Soviets attacked. By late January the Soviet 11th Army had broken the German front in several sectors and threatened to surround perhaps 70,000 Germans around Demyansk. When 3rd Shock Army broke the southern wing of German 16th Army Soviet advances threatened now to destroy 16th Army and open the flank to Leningrad. It is at this stage that game-play begins.

General Introduction - Demyansk Shield recreates the World War II campaign in the Valday Hills region of Russia, from late January 1942 through May 1942. One player will control the Axis forces (Germans), while his opponent controls the Soviet forces (Russians). The playing pieces represent the actual units that participated in the campaign and the map represents the terrain over which those units fought. The players maneuver their units across the map and conduct combat according to the rules of play. One player wins by capturing certain specified objectives while his opponent wins by avoiding those victory conditions.