Chalons: The Fate of Europe (Folio) 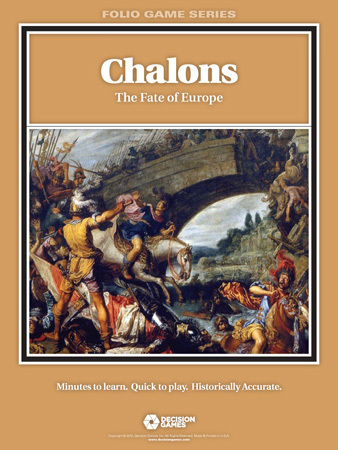 Throughout the mid-5th century AD, Attila’s Huns terrorized Europe. The skill of the Hun horsemen, particularly their accuracy with the composite bow while mounted, made them a veritable shock army. They continued to bring victory after victory to Attila, making him the master of Central Europe. After years of conquest, oppression and extortion, however, Attila’s recent invasion of Western Europe would be challenged: a remnant Roman army, under the command of Flavius Aetius, was sent to stop him on a field known as the Catalaunian Plain, near the village of Chalons. The Battle of Chalons would decide the fate of Europe.

Chalons utilizes the tried-and-true Battles of the Ancient World system, providing a simple yet accurate portrayal of ancient warfare. The combat system is intuitive, including all of the details that characterized warfare in the era of sword and shield. Various units may simply be swordsmen, while others may be archers or javelin throwers, horsemen, etc. The system includes rules for leaders, charges, melee, diversionary attacks, demoralization and more. A group of barbarians, for example, may be ordered to charge an enemy phalanx that had already hurled their javelins. As the barbarians near the phalanx, however, they may be ambushed by enemy ballistas hidden behind the ranks and waiting to disrupt just such a charge.

In Chalons the traditional design of the classic Combat Results Table emphasizes playability while also simulating the true strictures of ancient warfare. Famous leaders, such as Attila, also influence combat, replicating the importance of their presence during battle. Winning will depend on deployment, maneuver and opportunity, as well as the strengths and weaknesses of each particular army.