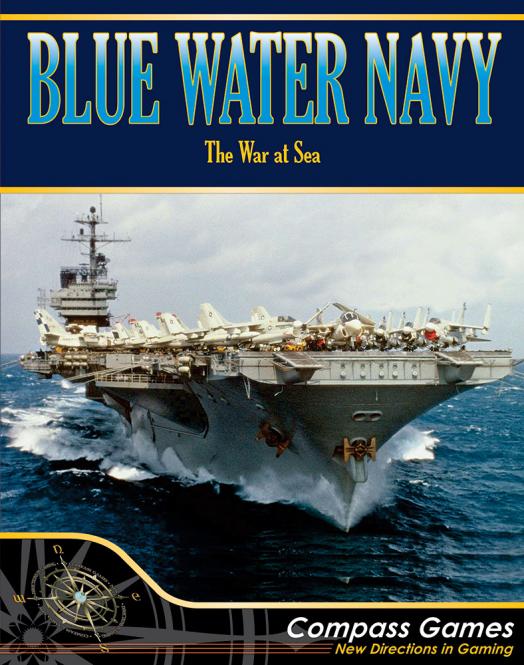 The year is 1983 and the headlines read:

June 15th 1983:  NATO fights the fight it was created for and the fate of the Free World hangs in the balance!

Will the Blue Water Navy deliver the convoys desperately needed in Europe or will the Red Banner Northern Fleet smash them at sea, allowing the Red army to steamroller Western Europe?

Blue Water Navy covers the war at sea, air, close-ashore and low-earth orbit from the Kola Peninsula in Northern Russia to the Mediterranean Sea and West over the Atlantic Ocean to the United States and Cuba. The game models the full order of battle that could be expected in 1980's wartime, from multi-regiment Soviet Tu-22 Backfire bombers to multiple US carrier groups.

The game is card driven, with each card providing points to move units or trigger special events such as 'KGB Assassinations' and 'Space Shuttle'. There is also a reaction mechanic where most cards can be used in the other player's turn to perform a spoiling event such as 'Raid Aborts' and 'Friendly Fire'.

The heart of the game is detection. Task Forces can only be attacked once detected. By contrast, land air-bases can always be attacked - their enemy knows where they are. The race to detect opposing Task Forces begins as soon as they enter potential striking range of units such as the formidable Soviet bomber formations, or perhaps the Soviet's submarine fleet which, whilst it has considerable strength, cannot effectively detect enemy forces without help from its comrades.

NATO must not only deliver convoys, but also protect its allies! Norway will be hard pressed, as will Denmark. Both will require urgent reinforcement. In the Mediterranean Sea, Soviet forces must be halted by naval aviation strikes. In the deeper seas, NATO may enact it's promised attack on the Soviet nuclear deterrent and the Soviets may attempt to respond. Perhaps the Typhoon SSBNs will flee under the Arctic ice to await doomsday, or hole-up in the White Sea. Perhaps the Soviets will use nuclear weapons and scatter those NATO forces that are no-doubt determined to bomb the Soviet's Kola Peninsula bases.

The game models Politburo approval (Soviet leadership) through a stability mechanism, and whether the Soviets feel they can reduce New York to cinders through the use of 'First Strike Points' - these allow the use of things like chemical or nuclear weapons. The game has spies, technological theft, satellites, B-52's, special forces and Soviet spy trawlers..