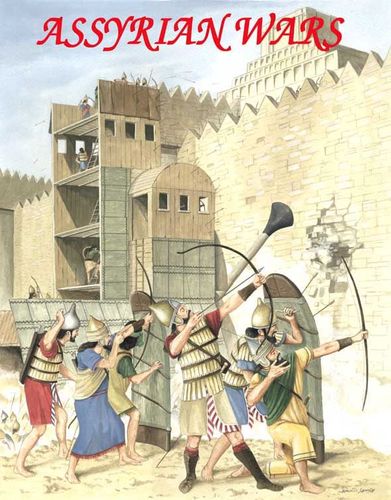 "Peace is not a condition between independent states. Peace is a service that can be bought...for tribute to the Assyrian King".

The Assyrians were the innovators of siege warfare. All siege techniques like rams, towers, undermining city walls have been developed to mastery by the Assyrians. Typical Assyrian is the shield bearer with oversize shields protecting the masses of bowmen from enemy fire.

Set in ancient Mesopotamia, Assyrian Wars (722 to 605 BC) covers the ruler period of the last four great Assyrian Kings and the decline and fall period resulting in the destruction of the Assyrian Empire and the defeat of their Egyptian Allies.

In 722 BC, Sargon II becomes King in Nineveh as new "King of the World". A couple of problems threaten the strongest and most effective Army the world has seen so far.

In the West an Assyrian Army is inflicting a hunger siege on Samaria in Israel. Will the Egyptian Pharaoh interfere?

In the North the rampaging Uratu Kingdom is threatening the Assyrian borders.

In the South Mardukkapallidin has become King of Babylonia. He started a revolt against Assyria, the mighty Elam in the Southeast joined him.

In the East the innumerable Mede tribes become a growing threat. The first signs of a large migration from the North consisting of Cimmerian and Scythian tribes become visible. And all those minor state tribute refusers who need to be punished!

Will you as the Assyrian King maintain your Empire? Or will you as Babylonia, Mede, Elam, or Egypt free the world from Assyrian Tyranny?

Assyrian Wars is a multi player game, but with the Assyrian player against all others. Temporary Alliance changes possible. Conflicting trade interests may cause minor conflicts. It can, however, be played solitaire as well.

Each game turn represents the ruler period of one Assyrian King, the last turn decline and fall. Turns are divided into impulses. Follow the order of states on the impulse track each card played represents an impulse.

Assyrian Wars is a point to point game. Assyrian Wars gives an easy entry for beginners. Still the game provides complex games situations depending on players strategy. Every game is different for nobody knows which random cards a player gets in addition to his fixed home cards.

Assyrian Wars allows detailed siege warfare. 66 cities on the map are waiting for you to take them. Can you overcome the massive city walls and water your horses at the Rivers of Babylon? The decision is yours to make.