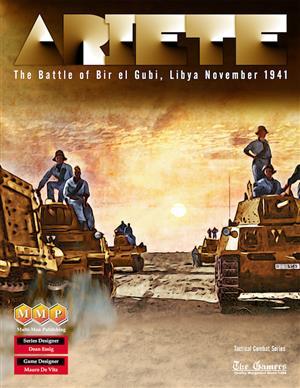 The well-equipped yet inexperienced British 22nd Armoured Brigade saw an opportunity to season itself against a supposedly weak Italian formation. At full-strength with 162 brand-new Crusader tanks, the British were eager to emulate the easy victories against the Italian 10th Army the previous winter. What actually ensued was a swirling desert battle between evenly matched opponents.

Ariete covers this entire mobile action in turns representing 30 minutes each and a map scale of 150 meters per hex. Units range from sections to platoons. A minimal amount of special rules bring the Tactical Combat Series to North Africa, highlighting the unique tactical challenge of the desert environment.

• The Italian player must manage a mobile defense against stronger British armored units until reinforcements arrive in the form of the 132nd Tank Regiment. He must make good use of artillery and AT assets (especially truck-mounted 102mm guns) to bloody the Brits and set them up for an armored counterattack.

• The Commonwealth player must solve the problem of using an armor-only force to crack defensive positions held by a well-led combined-arms force. The desert environment, with swirling dust clouds and relatively long lines of sight, will not help him in this regard!