Against the Odds 9 Suleiman the Magnificent 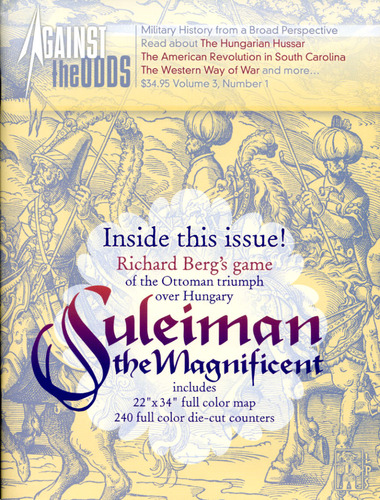 Suleiman the Magnificent is a game covering the massive battle on August 29th, 1526 between the Ottoman Empire and the army of the Kingdom of Hungary that eventually resulted in the fall of the latter kingdom and the disappearance of Hungary as an independent country for 400 years. The Hungarians numbered around 35,000 (including artillerists), the Ottomans, about 60,000. While there is much disagreement about numbers at this battle, all sources agree that the Ottomans did outnumber the Hungarians significantly. The Hungarian front line was stretched rather thinly to match, or attempt to match, the frontage that would be presented by the Ottomans. The Hungarians had, as was the practice for the last 200 years in European warfare, dug a trench in front of their front line infantry and artillery to give them a defense advantage. The actual battle, which started at around 3:00 PM, lasted but a few hours, maybe less.

Each combat unit represents about 750 men. The map scale is about 225 yards per hex and depicts the flat and, because of the proximity of the oft-overflowing Danube, somewhat soft and, in many places, slippery battlefield at Mohacs.

Suleiman the Magnificent is an accessible, fast-playing, fun game of low complexity. Optional rules include the politically charged issue that has reverberated down over the centuries, that many of the contingents of allies called in by Hungarian King Lajos did not arrive in time for the battle. Some were never going to do so; some were held back - specifically the charge leveled at Johann Szapolyai, Voivode of Transylvania because of his ambitions for the Hungarian throne (which he did get after Lajos' death and some deals reached with Suleiman).

Suleiman the Magnificent and issue #9 of ATO