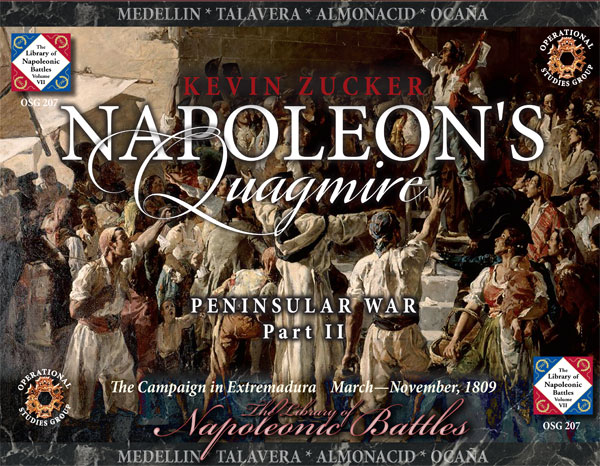 The Campaign in Extremadura

The Year 1809 began with Napoleon’s departure from the Iberian Peninsula, to face the Austrian threat on the Danube. He left his brother, Joseph, in nominal command of his armies in Spain, as puppet king in Madrid. Fighting flared on several fronts simultaneously, and the French occupation had some successes, notably at the siege of Saragossa, concluded by Marshal Lannes just before his departure to join the Emperor.

In 1809 the French under Joseph nearly mastered the plains of Old and New Castile. However, the Napoleonic magic could not work at such distances (a dispatch sent from Vienna to Madrid, would travel 2,400 km in 12 to 14 days); when dispatches arrived they were often days or weeks out of date. A series of battles were fought during the course of the year along the approaches to Madrid from Portugal, where the future Duke of Wellington had just arrived with a small British Army to second the Spanish Army of Extremadura.

Gregorio García de la Cuesta planned to attack Marshal Victor’s Corps of 18,000 after it had crossed the Guadiana River over the single span at Medellin. The French crossed the river, deployed on the plain to face a Spanish army of 26,000 spread out along an extended front of 4 miles. An initial attack by Latour-Maubourg’s dragoons against del Parque’s infantry was met with firm resistance and repulsed. However, as the Spanish advanced and casualties increased, their formations began to lose steadiness.  Seeing an opportunity, Latour-Maubourg launched a second attack. This time his dragoons overwhelmed the left flank of the Spanish army, while Lasalle’s light cavalry were equally successful on the opposite flank. Cuesta’s army disintegrated, losing 8000 casualties and 2000 prisoners along with 9 colors and 20 guns.

Viscount Wellesley set up defensive positions in front of Talavera (116 km from Madrid, flanked by the River Tegus) and waited for the advancing Marshal Victor. Victor had 46,000 veterans and 86 guns, Wellesley had 20,000 British and 35,000 unreliable Spanish troops. The French attacked Wellesley‘s center in column and were repulsed by British firepower. In the afternoon a gap opened in the British center and the French threw 10,000 troops into it. Wellesley could only spare 3,000 troops to oppose them. The British waited until the enemy were 50 yards away, both sides firing point blank. The French columns broke, leaving 1,700 dead and wounded. Further attacks were repulsed. As the day ended, news arrived that the Spanish Army of La Mancha, under Venegas, was moving on Madrid. King Joseph under the advice of Marshal Jourdan called off the attacks and withdrew.

Venegas’ threat to Madrid was meant to prevent General Sebastiani’s 4th Corps from moving west to aid Victor, but Venegas had been inactive recently, allowing Sebastiani to move to Talavera. The arrival of a large army from the north west of Spain, under Marshal Soult, forced Wellington and Cuesta to retreat back into Estremadura. Leaving Marshal Victor to pursue Wellington, Joseph took Sebastiani's corps and his Reserve east, to counter Venegas. On 9 August Sebastiani crossed the Tagus, racing for Toledo. The Spanish were not far behind. Sebastiani’s men ran into the enemy 5th division, forcing them toward Mora and Madridejos. By 10 August the rest of the Spanish army had come up face to face with Sebastiani’s corps and Milhaud’s dragoons at Almonacid. Joseph and his Reserve were about ten miles to the rear.

Juan Carlos de Aréizaga took command of the Army of the Centre and immediately marched from the foot of the Sierra Morena to the plain on November 3, crossing the Tagus 60 miles south of Madrid. This was a threat Joseph could not ignore. He sent Marshal Mortier across the Tagus, behind Areizaga, and met up with him at Ocaña. Ariezaga was awaiting his baggage trains and took up a position in order of battle behind a ravine, in order to wait for them. Soult—now Joseph’s Chief of Staff—chose to ignore the Spanish left, protected by a steep ravine, and attack on their right. Sebastiani took three brigades of cavalry against Freire’s cavalry on the Spanish right wing, and quickly routed them. They then attacked the flanks of the infantry divisions, who had no chance to form square. At the same time the Polish and German infantry assaulted the main Spanish line east of Ocaña.