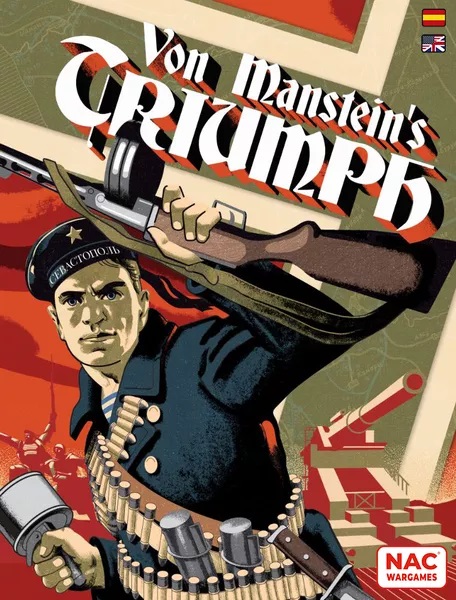 On June 6th, 1942, Erich von Manstein’s 11th Army began its last assault on the besieged Soviet fortress of Sevastopol, the latest episode in the German conquest of the Crimean Peninsula, which was initiated in September 1941. The operation, code named Störfang, was also the prelude to the German summer offensive of 1942, freeing the troops committed in Crimea for other tasks and securing the southern flank of the attacking armies towards the Volga.

Von Manstein’s Triumph is a game for two players that simulate the final assault on the fortress–port. This is a card driven game (symbolizing orders, historical events and equipment) in which both players maneuver their forces, made up of wooden blocks, over the Map Board, which depicts the battlefield divided into areas for positioning and movement purposes. Key to victory is the control of Victory Point areas, which represent the critical points of the defense.

Victory is determined at the end of the game with the player having most Victory Points (VPs) being the winner. VPs are printed on the Map Board inside the red banners. A player controls the VPs printed in an area if that player controls the area. Initially all VPs are controlled by the Soviet player, so the Axis player has to attack the areas containing them to gain VPs. The Axis player loses VPs when receiving reinforcements. If both players have exactly the same number of VPs at the end of the game then this results in a draw.

One player takes the role of the German Commander in Chief of the 11th Army (Erich von Manstein) and has to take key locations in the Fortress-city of Sevastopol, defended by the Soviet Independent Coastal Army (commanded by Ivan Efimovich Petrov).

As the attacker you will have to plan carefully your assaults to maximize the damage you inflict of the sizable Soviet forces. The battle, initially, will be a meat grinder of attrition, be careful of earlier penetrations into the Soviet defenses as they are very able to counterattack... So, you have to thin out the Soviet defenders to prepare the way for a breakout and a battle of exploitation that will led you to the Victory Point sites.

As the Soviet player you have to trade men for time. Your main weapon is numbers and the field and permanent fortifications of the outer ring around the fortress. So, you have to contest every inch of ground and slowly give up positions to make the German run out of time: Hitler is watching and he needs troops and assets to begin his Fall Blau summer offensive...

Will you run out of time as assaulting German or will you be able to take the Fortress in time...? It is a race against the clock.

Cards allow players to make troops move, assault, counterattack during the enemy player-turn, influence the combats and make air and artillery bombardments. Romanian troops and Mountain troops will be present as well as the "elite" Soviet Naval Infantry brigades, so often used for counterattacks and shoring up breaches in the line... Even an NKVD regiment with extra motivation for not give up their positions.

• It only takes 2 hours to recreate this desperate struggle.
• Players have to fight not only against each other but also against the time.
• Simple rules and card driven game.
• The game components are of the highest quality, highlighting the 2x2 cm wooden blocks, the cards and the board.
• Historical accuracy. Includes a playbook that provides designer's notes, historical commentary and example of play