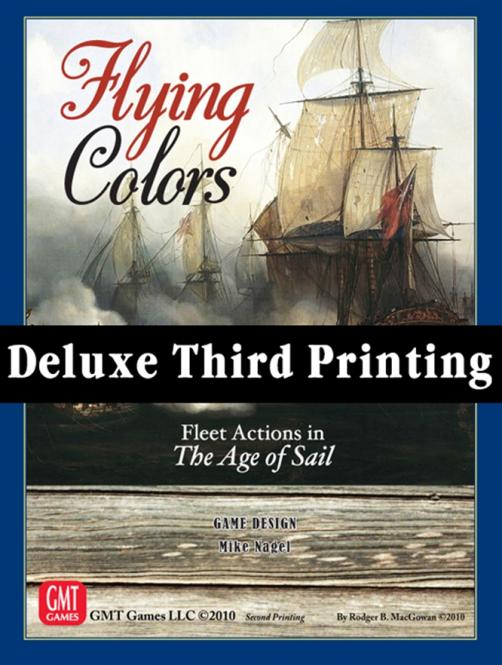 Flying Colors returns you to the age of sail where mighty men-o-war and Ships of the Line met in vast engagements for command of the sea. Unlike many other games set in the period, Flying Colors provides a simple, fast-playing system allowing players to re-enact battles containing dozens of ships on each side. Rather than focusing on the abilities of individual ships, Flying Colors uses broad classes of vessel within each "rate" and concentrates the players minds on maintaining command of their fleets using a simple command system.

From the Publisher:
Flying Colors recreates naval actions during the height of the Age of Sail, from small engagements to full battles involving dozens of ships in each fleet. Play is fast, furious, and does not require the pre-plotted movement found in many other naval games. Instead, a simple initiative and command system allows players to activate and maneuver their fleets in a realistic manner, indicating how older commanders adhered to rules of engagement where more forward thinking commanders, like Nelson, could retain control of their fleets after the first broadsides began to be exchanged.

This is not a strategic level game where one piece represents several ships. Flying Colors includes 300 individually named ships rated for size, gunnery, boarding ability, and damage capacity. Also included are nearly four dozen individually named commanders, rated for their ability to control their formations as well as the impact of their presence within the fleet. The game system provides what naval enthusiasts will expect in a tactical Age of Sail game: broadsides, rakes, anchoring, wind effects, weather, shore batteries, and much more. All this is packed into a short, accessible rulebook.

Included within the game are 17 historical scenarios ranging from the Battle of Minorca (1756) during the Seven Years War to the Battle of the Capes during the American Revolution and on through the Battle of Trafalgar (1805) during the Napoleonic Wars. The battles range in size from small engagements playable on a single map through huge engagements like the Glorious First of June playable on three maps. Players are also free to create their own variants and "what-if" scenarios using point values for each ship. Most scenarios can be played within a few hours and two players can complete even the largest within a day. Several are also well suited to solitarie play.

You can now recreate Nelson's glory with Flying Colors!

NOTE: 2010 Reprint will include Thicker Counters and a thicker, more durable Box.