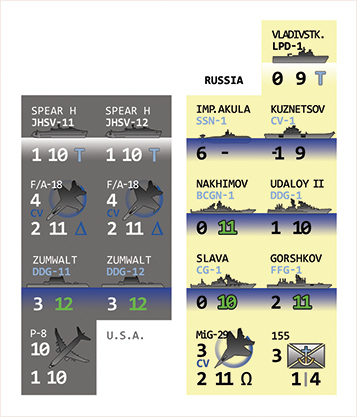 Putin called last night. He was upset about the absence of Russian units in the BtC counter mix. He bragged about naval reforms, new missiles, and new ships. My eyes rolled, (he couldn’t see that over the phone) but he did make some good points. For example, Russian anti-ship missiles can outrange their U.S. and Chinese counterparts. He explained how missile technology is integral to Russian ship design by citing his aircraft carrier, the Kuznetsov. That CV allocates precious deck space to missile launchers. So, it carries fewer planes, but has an impressive anti-ship missile capability! Indeed, when the Chinese bought the Varyag from Ukraine they covered some of those missile slots to add deck space to support more aircraft. Hence, the Liaoning can carry more aircraft than the Kuznetsov even though those two ships are of the same class. And, Russian submarines are different too. Those Akulas don’t carry land attack cruise missiles (no LACM capability), but they have more torpedoes. The man reminded me that one of those boats patrolled the Gulf of Mexico for a full month before we detected it; they are quiet.

So we made new counters to represent Russia’s Pacific fleet as it might appear around 2020. WE also added some U.S. units such as the Zumwalt class destroyer; the press expects us to have three of them by 2020. Of course, we're also designing a new scenario, The East is Red, to feature these units in combat around the East China Sea although they can be also be used in the already existing campaign game.