Against the Odds Annual 2010 Four Roads to Moscow 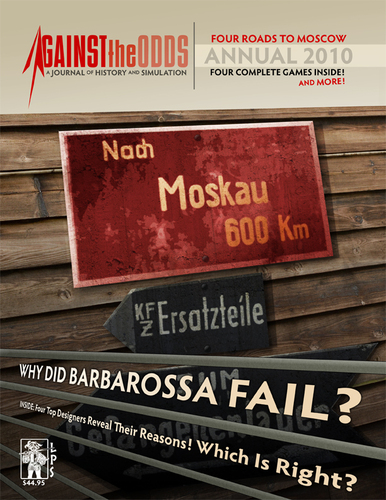 Shortly after Directive #21 was issued in 1940 authorizing the attack on the Soviet Union, Hitler personally intervened to assign it the codename to which it would henceforward be known: Barbarossa. He chose as his paragon the Germanic hero and twelfth-century Holy Roman Emperor Frederick I, known as "Barbarossa" from the Italian for "redbeard." In 1190, while leading the Third Crusade, Barbarossa drowned and his body was lost. Ironic of Hitler to choose such a murky symbol: a Crusader who failed in his holy mission to the East.

But, why did Barbarossa fail? Now, four veteran designers combine in a unique offering from Against the Odds. The ATO Annual edition for 2010 includes four different games, which each address this question.

Mike Rinella has given us Monty’s Gamble, Shifting Sands, Not War but Murder, and many others.

Ted Raicer may be most famous for Paths of Glory and a series of other WWI games, but his experiences with WWII are solid as well, including Barbarossa to Berlin and The Pocket at Falaise for ATO.

Roger Nord is well known to ATO members for his WWI designs Big Push and Verdun, but he has also designed games like Lawrence of Arabia and Grand Army of the Republic. Will his Barbarossa design use squares?

John Prados is associated with some milestone games, like Third Reichand Cassino, and his Fortress Berlin rates as one of ATO’s most popular games.

So why did Barbarossa fail? Our designers have drawn some very different and startling conclusions about what really happened, and modeled it in four very different approaches. "Four Roads" offers four complete simulations that will provide hours of challenging play and comparison.

As always, the Annual features a "extra-size" magazine, with an in-depth look at the history behind the games, plus other articles. Make yourself the proud owner of this challenging look at the decisivecampaign of WWII.

Bonus Item: Purchase this issue direct from us (either while subscribing or single purchase only) and we'll include a set of free link rules tying all four games together. Have the ultimate Barbarossa experience by fully exploring the choices that shaped the campaign!

Four Roads To Moscow and the 2010 ATO Magazine Annual

Maps - Four full color 17"x22" mapsheets
Counters - Over 450 full color 9/16" die-cut counters
Rules length - Around 8 pages each game
Charts and tables - Averages 1 page each game
Complexity - Medium
Solitaire suitability - Average
Playing time - Up to 3 to 4 hours for each game, 12 to 16 hours to play them all