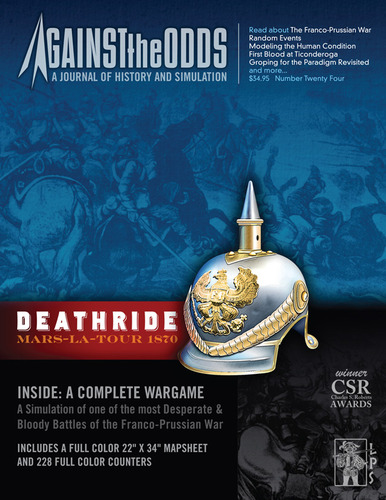 The Franco-Prussian War started from a number of causes, ranging from Prussian objections to the French buying Luxembourg, to a dispute about a vacant Spanish throne... sounds like the "good old days" for European wars, doesn't it?

Except, with breech-loading rifles and artillery all around, and the first "machine guns" in mass operation, this war had a very modern feel about it...but still vestiges of the old ways, especially at Mars-la-Tour, where both sides made powerful, desperate, and bloodily successful cavalry charges...."Deathrides" to the men within them.

Mars-la-Tour may be unfamiliar to some readers. Basically, the main French Army was on its way "someplace else" when it bumped into a smaller German force that promptly launched a series of attacks, aiming (successfully) to delay the movement. The situation has some parallels to Antietam, except there was no "Lost Dispatch" telling one side the strength and disposition of the enemy. While at times the French outnumbered the Germans by as much as 5-1, they actually believed themselves significantly outnumbered!

Mars-la-Tour led directly to the Battle of Gravelotte (just 2 days later) and then to the siege of Metz. A French victory at Mars-la-Tour would have changed the entire complexion of the Franco-Prussian War. And victory was certainly possible.

Deathride, by noted designer Charles Vasey, features the best of desperate situations, highlighting the technology and command differences between the two armies: Technological, such as the French superiority in rifles versus the German superiority in artillery; Command, contrasting the calculated aggressiveness of the Prussians versus the floundering piecemeal activations of the French.

Deathride is a division level simulation (a French division is 2 counters, a German division is 4) that features variable impulses, so you're never sure how long a turn will last. We will be offering this game with a variety of counter sizes that provide a sense of period formations and offer enough room to show off the wide range of uniforms used in the period, from the "red pantaloons" to the black hussars (and one cavalry unit with uniforms claimed to be too gaudy for Murat!).

Chassepot versus Krupp. Elan versus battlecraft. Truly a desperate situation.